The official name of the country is Republic of Poland. The country is situated in central Europe by the Baltic sea. The area of Poland is 312 685 km². There are approximately 38 million inhabitants. Warsaw is the capital. 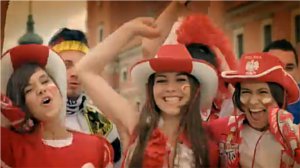 Poland is divided into 16 voivodships. The map presents the location of each individual voivodship on the country's area. 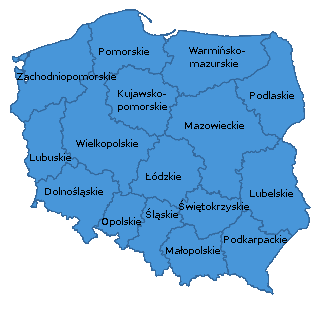 The basic monetary unit (currency) in Poland is zloty. 1 zloty is divided into 100 cents (grosz). According to ISO 4217 norm, zloty is determined by the PLN code, a shortcut zł is applied for zloty and gr for cents. Polish coins and banknotes.

White eagle wearing a crown situated on a red background – this is how we can simply describe the Polish emblem. The eagle has its head directed towards left, its wings are spread open. The crown, eagle's beak and claws are golden. The eagle is situated on a red shield.

Polish flag is a rectangular fabric with each side measuring 8:5. It consists of two horizontal stripes of the same broadness, the upper is white and the bottom red.

The Polish anthem is a song entitled Dabrowski's Mazurka. The music and the lyrics were created in 1797.
Words of the hymn:

Poland has not yet succumbed.
As long as we remain,
What the foe by force has seized,
Sword in hand we'll gain.

Chorus:
March! March, Dabrowski!
March from Italy to Poland!
Under your command
We shall reach our land.

Cross the Vistula and Warta
And Poles we shall be;
We've been shown by Bonaparte
Ways to victory.

As Czarniecki Poznan town regains,
Fighting with the Swede,
To free our fatherland from chains,
We shall return by sea.

And the father to Barbara,
Says and crying:
"Listen that, propably ours
are playing drums!"

Here you can listen to the Polish anthem – instrumental version.